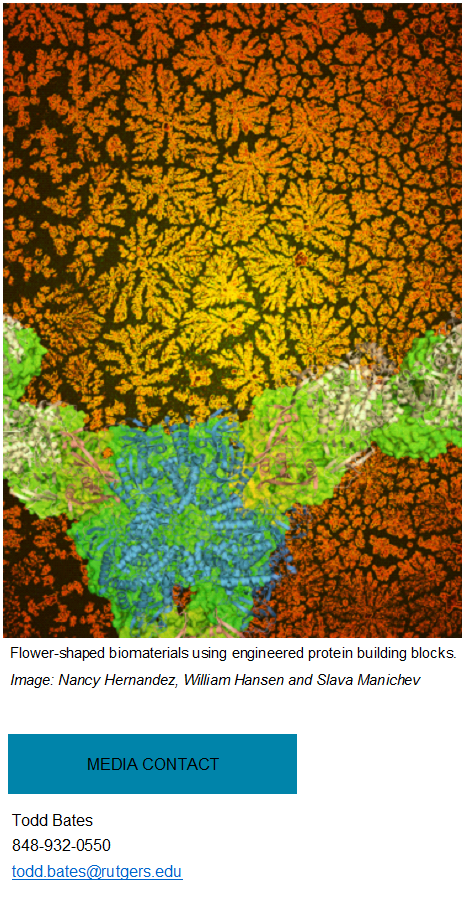 “Biomolecular engineers have been working on modifying the building blocks of life – proteins, DNA and lipids – to mimic nature and form interesting and useful shapes and structures,” said senior author Sagar D. Khare, an associate professor in the Department of Chemistry and Chemical Biology in the School of Arts and Sciences at Rutgers–New Brunswick. “Our team developed a framework for engineering existing proteins into fractal shapes.”

In nature, building blocks such as protein molecules are assembled into larger structures for specific purposes. A classic example is collagen, which forms connective tissue in our bodies and is strong and flexible because of how it is organized. Tiny protein molecules assemble to form structures that are scaled up and can be as long as tendons. Assemblies of natural proteins are also dynamic, forming and dissolving in response to stimuli.

The research team developed a technique for assembling proteins into fractal, or geometric, shapes that are repeated over and over. Examples include trees, leaves and pineapples. The team used protein engineering software to design proteins that bind to each other, so they form a fractal, tree-like shape in response to a biological stimulus, such as in a cell, tissue or organism. They can also manipulate the dimensions of the shapes, so they resemble flowers, trees or snowflakes, which are visualized using special microscopy techniques.

These techniques could lead to new technologies such as a filter for bioremediation, which uses biological molecules to remove herbicides from tainted water, or synthetic matrices to help study human disease or aid tissue engineering to restore, improve or preserve damaged tissues or organs.

The next steps are to further develop the technology and expand the range of proteins that form fractal shapes as well as use different stimuli, such as chemicals and light. The scientists also want to study how fractal shapes form in greater detail, so they could gain greater control over the process and the shapes and sizes of designer biomaterials.

The study also included scientists at Baylor College of Medicine and the University of Minnesota.