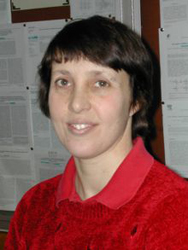 E-mail: This email address is being protected from spambots. You need JavaScript enabled to view it.

We are investigating atomic and molecular beam scattering from surfaces prepared under ultrahigh vacuum conditions. The nature of the molecular surface interactions can determine phonon creation/annihilation, electron-hole pair excitation, electron transfer or trapping, and adsorption routes. The major focus of our research efforts involves thermal-energy atomic helium scattering as a technique in the study of clean and adsorbate covered surfaces. Helium is an extremely inert, surface-sensitive, diffractive probe of surface topographies and long range ordering phenomena. We investigate also the dynamics of surfaces,low energy excitations, and surface diffusion processes. Each of these features are of utmost importance in thin film growth at surfaces. In addition we use both diffraction and real-space scanning tunnelling microscopy in in-situ studies of the growth of thin films by both thermal evaporation and chemical vapor deposition. 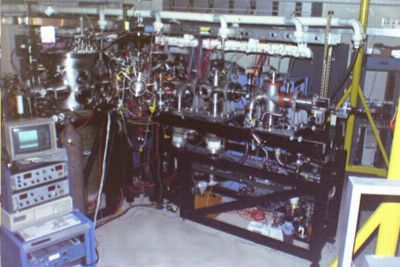 Helium Atom Scattering (HAS) is one of the most powerful and versatile surface science techniques. Thermal energy atoms (including He) differ from other diffractive probes (such as electrons, photons and neutrons) in the sense that they are completely surface sensitive and non-destructive. This unique behaviour results from the fact that the interaction of a He atom with a surface is dominated by a long range, Van-der-Waals like attraction and a shorter range repulsive interaction due to electronic overlap between the He and the surface species. Consequently, all thermal energy He atoms are reflected from the surface typically at a distance of 3 to 5 from the local surface plane of atoms. Helium atoms are chemically inert and their translational energies are much smaller than typical binding energies of adsorbates. Helium atom scattering can be used to study metallic, semiconducting and insulating surfaces as well as adsorbate systems and growth phenomena.

Thermal energy helium atoms have de Broglie wavelengths of between 0.5 and 1.5 , which are comparable with atomic dimensions. By the use of a nozzle expansion source, we are able to produce a very intense and essentially monochromatic He beam. Analysis of the angular distribution of He atoms backscattered from a surface yields the corrugation function of the surface which in turn reveals the surface structure. The excitation spectra of the surface is obtained from the time of flight analysis of the backscattered He atoms. We are particularly interested in using HAS to study surface defects and low concentrations of isolated adsorbate species. We have developed new concepts behind the elastic diffraction of He from step edge defects and now plan to extend these concepts to include inelastic diffuse intensity contributions. 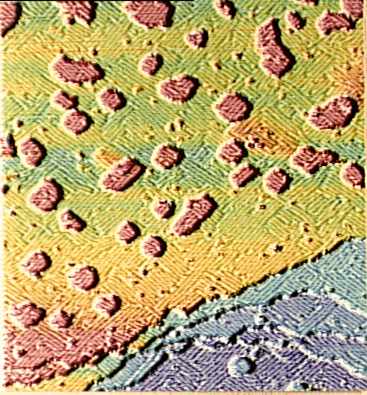 Scanning Tunneling Microscopy (STM) is a technique that can produce atomic resolution topographic images of both metal and semiconductor surfaces. STM relies on a quantum mechanical tunnel current that runs between a surface and a sharp metallic tip which are in close proximity. Since the tunnel current is very strongly dependent on the distance between the tip and the surface, use of a feedback loop can control the distance between tip and surface enabling imaging of the surface and individual ad-atoms or ad-molecules.

We have also developed a computer based routine for 2-D island evaluation, and have investigated the island size distributions as a function deposition temperature. We have interpreted temperature independent island shapes in terms of anisotropic island attachment rates. In addition, we have shown that size dependent island aspect ratios are a feature common to all kinetically limited anisotropic island growth mechanisms.

Our long term aim is to investigate the growth of materials, especially metals, under realistic conditions of semiconductor device metalization. We plan to characterize both equilibrium and non-equilibrium growth kinetics and to demonstrate the clear influence of site specific chemistries in chemical vapor deposition (CVD). Experiments on Cu CVD are currently under way.

We have developed a completely novel and highly sensitive probe of sheet conductivity (US Patent 6448795). This method is applicable to investigations of bulk materials and also to in situ measurements of surface conductivity variations that are induced by processes such as gas adsorption, heteroepitaxial growth, and even roughening through homoepitaxial deposition or etching. Our conductivity probe technique also has considerable potential in looking at near-surface conductivity changes on highly conducting substrate materials. This remote contactless method uses a driving RF coil and sensing coils that are driven at a frequency in the range of 10 to 30MHz. The probe measures a signal that arises from an imbalance of mutual impedances (between the two sensor coils and the central driving coil), which arises from induced eddy currents in the surface/material under investigation.