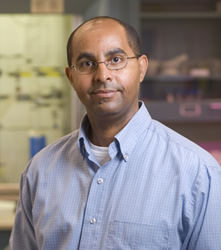 The primary research activities in my group focus on the design, synthesis, and self-assembly of novel inorganic and organic-inorganic hybrid nanostructured and nanoporous materials and nanobiomaterials having unique catalytic, surface, biological, and electronic properties. Our materials are typically chosen to have multifunctional groups as well as novel structures at the nanometer scale. Uncovering the structure-property relationships as well as the potential applications of these materials for catalysis, nanoelectronics, separations, and sensing is also a major part of our research program.

Specifically, over the past few years, my group has developed several synthetic routes to various novel nanomaterials and investigated their physical and chemical properties, and potential applications in several challenging areas facing society, including novel catalysts for efficient production of fine chemicals and the development of nanomedicines for the effective treatment of cancer. In addition, my group has recently started a major new research program to develop novel nanomaterials, which can contribute to the solutions of renewable energy problems worldwide (e.g., the development of sustainable catalysts for fuel cells and electrolyzers, see Figure 1). My research group also made seminal contributions of multifunctional nanostructured materials that juxtapose at least two functional groups in a single nanoscale structure for sensing, catalysis, electrocatalysis, photocatalysis and photovoltaics. Recently, my group reported on a number of novel nansostructured electrocatalysts with great stability, high catalytic activity and great selectivity for water splitting, metal-air batteries and fuel cells and multifunctional nanomaterials for targeted delivery of therapeutic agents to specific cells. 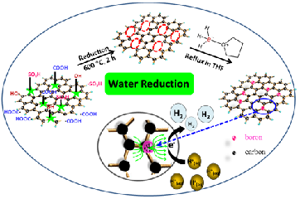 (1) Nanoparticles and core-shell nanoparticles with novel structures and multifunctional groups: The properties of nanomaterials whose sizes are only a few billionths of a meter have unique properties that are neither bulk nor molecular and can be tuned via the size, shape, and structure of the materials. We are interested in the synthesis and self-assembly of inorganic and composite nanoparticles and core-shell nanoparticles having novel structures. By introducing multifunctional organic, organometallic, or biological groups into such nanostructured materials, we can create new classes of nanomaterials with unprecedented and potentially useful properties for nanoelectronics, sensing, biological imaging, and targeted drug delivery. Such bifunctional materials may allow the catalytic transformation of multi-step reactions in one-pot (without the need for isolation of intermediate products), catalyze chemical transformations more efficiently due to the synergistic effects of the two catalysts, or perform selective reactions of one reactant from a mixture of reacting molecules; 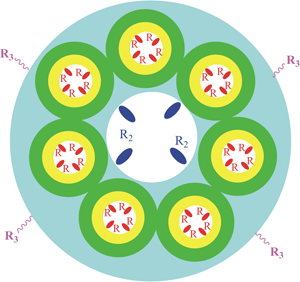 (2) Nanoporous and mesoporous nanowire materials: The bottom-up synthesis of nanostructured and mesoporous materials using templates can create various new classes of nanomaterials. Our research in this area focuses on the combination of "hard templates" with "self-assembly" to produce nanowires and nanorods having nanoporous and mesoporous structures and frameworks. We also investigate the potential of these materials for host-guest inclusion and for separation of various biological and chemical species for environmental remediation purposes.

(3) Multifunctional self-assembled monolayers: Self-assembled monolayers (SAMs) on various substrates have potential for several technological applications. Our research deals with the synthesis of multifunctional SAM structures using functionalized organosilanes and alkane thiols. We are interested in the fundamental self-assembly studies of these multifunctional molecules on various substrates as well as the potential of such SAM structures for nanopatterning of molecular electronic devices and for catalysis and sensing applications.