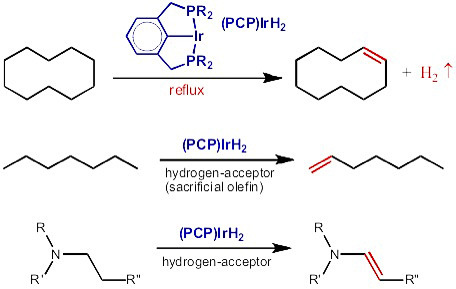 The research conducted in the Goldman group is focused on the reactions between transition metal complexes and simple organic molecules, particularly hydrocarbons. Our work generally involves a mechanism-based approach to the development of catalysts. The catalytic functionalization of alkanes and other molecules with normally inert C-H bonds is a scientifically challenging problem that presents great opportunities with respect to economics, environmental benefits, and energy self-sufficiency. One route to such conversions, which we have extensively developed, is dehydrogenation to give olefins. In particular, we and other groups have found that pincer-ligated iridium complexes are effective dehydrogenation catalysts.

Olefins are ubiquitous as intermediates in the petrochemical, commodity chemical, and pharmaceutical industries. Tandem systems that could effect dehydrogenation of alkanes or alkyl groups, followed by a useful secondary reaction of the resulting olefin, offer potentially powerful routes to various products, while avoiding undesirable secondary reactions that can occur in simple alkane dehydrogenation systems. In collaboration with the group of Maurice Brookhart at UNC, we have developed one such system that effects the metathesis of alkanes.

A potential application of this system is in the upgrading of Fischer-Tropsch alkane product mixtures to afford greater yields of C9-C19 n alkanes, ultimately obtained from feedstocks such as coal or biomass. (Known as FT diesel, this comprises a transportation fuel that burns cleanly and gives ca. 35% greater mileage per ton CO2 emitted than gasoline.) Other reactions under study include the hydrocarbylation of olefins and the metal promoted cleavage of C-O bonds.

In addition to experimental approaches, DFT calculations are conducted in collaboration with Prof. K. Krogh-Jespersen. In addition to providing valuable leads in catalyst design, this work has yielded new perspectives on the most fundamental aspects of organometallic chemistry such as the nature of the metal-CO bond or the process of C-H addition.