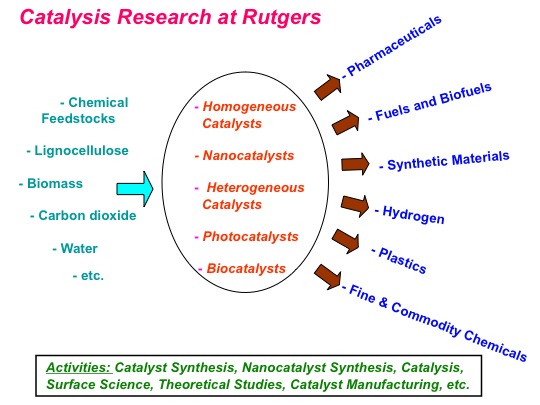 The mission of the Rutgers Catalysis Research Center (RCRC) includes the development of novel homogeneous and heterogenous catalysts, photocatalysts, biocatalysts, and nanocatalysts that enable greener and energy-efficient routes for the productions of various fine/pharmaceuticals, commodity chemicals, biofuels, plastics and synthetic materials. Researchers in the center also study fundamental, surface science and theoretical aspects of catalysts and catalysis and investigations of their structures and their structure-activity relationships.

The center catalyzes mutual interactions and inter-disciplinary collaborations among many researchers around Rutgers as well as other nearby institutions such as the New Jersey Institute of Technology (NJIT). RCRC also actively cooperates and forms partnerships with local catalysis societies such as the Catalysis Society Of Metropolitan New York, which is a local chapter of the NACS (North American Catalysis Society) serving the central New Jersey area and the rich catalysis intensive chemical industries around New Jersey.

RCRC was established in December 2009 through the support and initiatives by the Rutgers Institute for Materials, Devices, and Nanotechnology (IAMDN); the Rutgers Energy Institute (REI); and many faculty members in multiple departments around Rutgers who have common research interests. The center constituted researchers from many different departments - including chemistry, physics, chemical engineering, materials science, biological sciences, biochemistry.

With financial support from IAMDN and REI, the center also conducts a Catalysis Seminar Series, in which world-leaders in the field of catalysis give seminars at Rutgers while meeting with members of the center to exchange ideas.