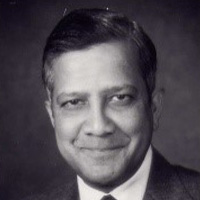 Dr. Suresh Damle retired in 1998 after working in various industrial research and development positions for 35 years. He most recently acted as a consultant for Chemical Industry and operating partner for Edgewater Capital Partners in Cleveland.

He previously spent 22 years with PPG Industries, Inc., where his he has worked in the areas of synthetic organic chemistry, organometvallic chemistry, and phosgene chemistry. Among his notable achievements are his contributions in developing a new business in Pharmaceutical Intermediates at PPG based on expertise in phosgene chemistry.

Dr. Damle served on the Board of Directors of the Fire Retardant Chemicals Association for ten years from 1976-1985. He served chairing various committees of the North Jersey Section of the ACS from 1966-1975, and has more than ten U.S. Patents and over 25 publications.

He and his wife are both graduate students of the School of Chemistry.