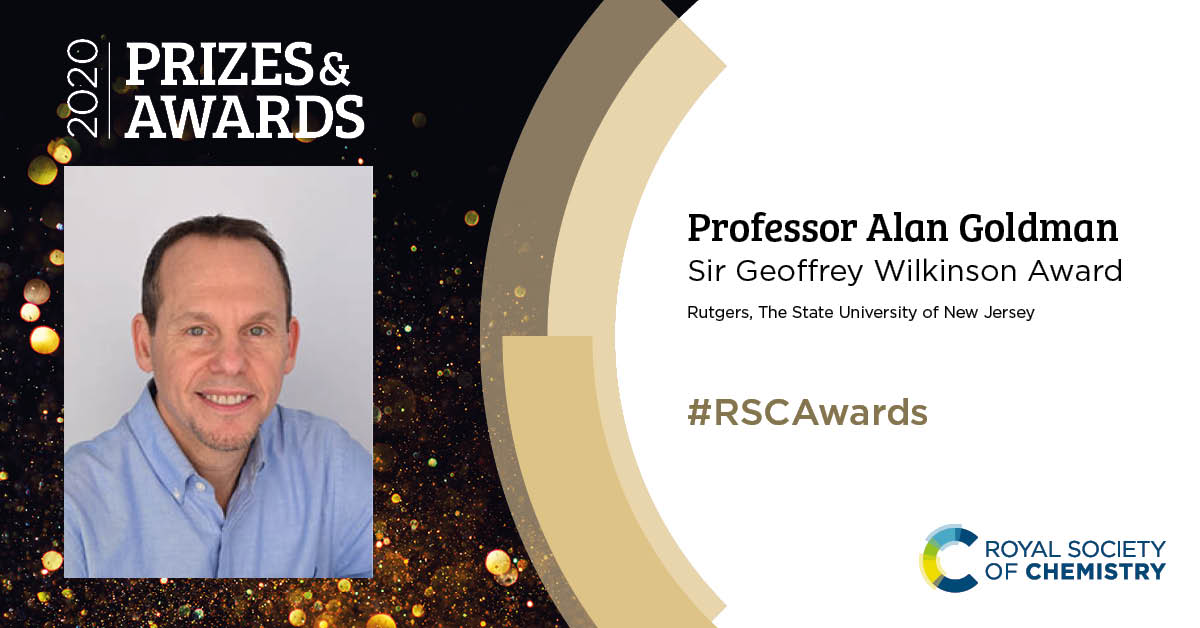 Professor Alan Goldman received a Sir Geoffrey Wilkinson Award from the Royal Society of Chemistry for deep and scholarly insight into the mechanisms of organometallic reactions and the design of organometallic catalysts. Goldman practices science that is fundamental but related to large challenges facing society, particularly the goal of transitioning to a prosperous environmentally sustainable economy – including, for example, the development of carbon-neutral systems for transportation fuels and fertilizers.

"Society is not faced with problems that were designed, like course exam questions, to be solved based on the ideas of a single discipline," says Alan Goldman.

Goldman received his BA degree in 1980 from Columbia University where he did research with Professor Walter Klemperer on the synthesis and characterization of mixed-metal polyoxoanions. He received his PhD in 1985, also from Columbia University, where under the advisorship of Professor David Tyler, he conducted research focused on organometallic photochemistry and the chemistry of odd-electron, particularly 19-valence-electron, organometallic species. From 1985 to 1987, Professor Goldman studied the reactivity of transition metal polyhydrides in the laboratory of Professor Jack Halpern.

He joined the faculty of Rutgers University in 1987 and rose through the ranks to become a Distinguished Professor in 2005.

Professor Goldman’s research is centered on the development of organometallic catalysts based upon an in-depth understanding of mechanism and reactivity. In 1990 he reported the development and the unanticipated mechanism of a novel photochemical system for alkane dehydrogenation. Based on that work, his group then developed the first highly efficient thermochemical catalysts for alkane transfer-dehydrogenation.

Goldman and theorist colleagues Karsten Krogh-Jespersen and Faraj Hasanayn played a leading role in developing approaches to the development of organometallic catalysts and the elucidation of reaction mechanisms that integrated computation with experiment.

Goldman and collaborators have developed systems in which alkane dehydrogenation catalysts act in tandem with catalysts for secondary reactions, including, with Maurice Brookhart, systems for alkane metathesis. The lab has studied the making and breaking of carbon-heteroatom bonds by organometallic catalysts and has recently turned their attention to nitrogen fixation.

Awards received by Professor Goldman include the Alfred P. Sloan Fellowship, the Camille and Henry Dreyfus Teacher-Scholar Fellowship, the ACS Catalysis Lectureship Award for the Advancement of Catalytic Science, and the ACS Award in Organometallic Chemistry.

Read Professor Goldman's Q & A with the Royal Chemistry Society.