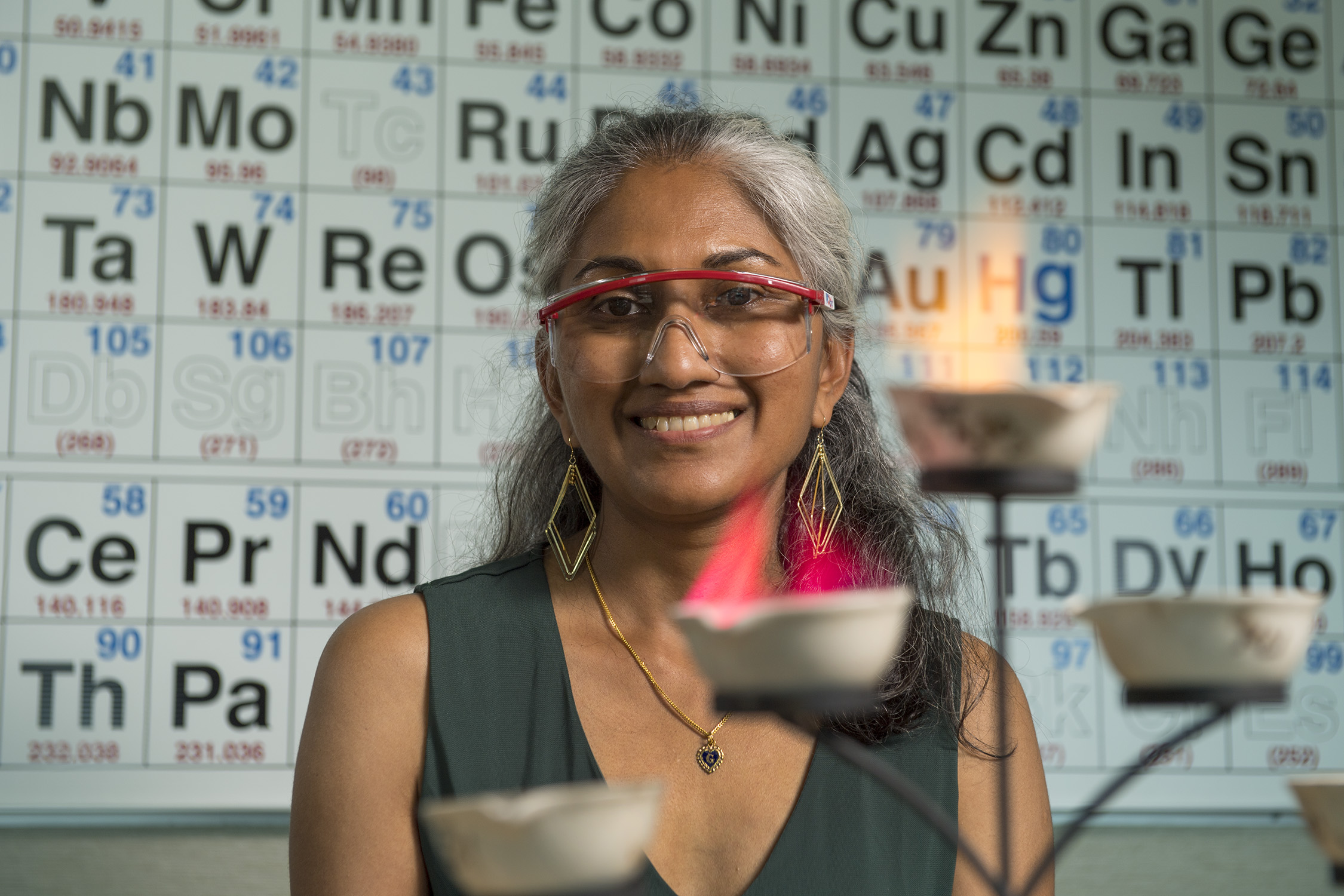 A chemist combines a special salt with alcohol in a porcelain dish and ignites the ingredients. He pours another liquid into a separate beaker containing a tiny crystal that makes the solution unstable, causing the salts to separate from the water and form a fast-growing solid tower.

Welcome to art – not science – class.

“The experiment is an anology for pigment volume concentration. If you have too much pigment in a paint binder, it causes it to become unstable, which means the pigment particles in it can no longer be contained and it’s going to escape in some way. You’ve probably seen this in outdoor paints when they texturize and particles fall off,” said Geeta Govindarajoo, whose “Chemistry of Art” course at Rutgers–New Brunswick explores the ways art and science are fused.

Figuring out how to make a specific type of paint through experiments with pigment and dye, learning how corrosion can affect metal or building a structure that will last for centuries like the Romans - all require a level of science. 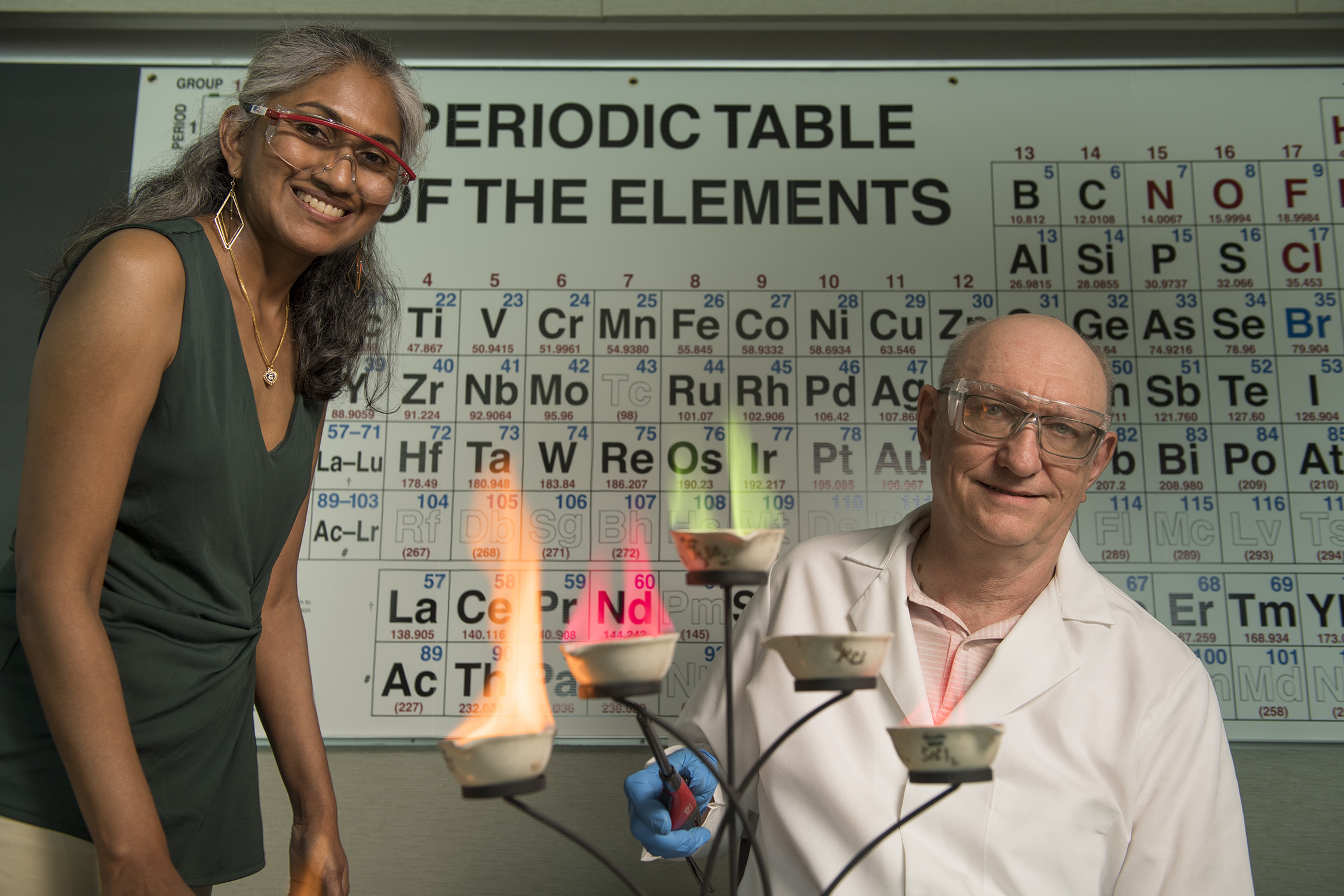 Govindarajoo was inspired to create the course after reading an autobiography by New Jersey-native Ken Perenyi, who is considered one of America’s most successful art forgers. His book, Caveat Emptor: The Secret Life of an American Art Forger, explores how he became a prolific con-artist through his knowledge and use of chemistry.

“One of the most common ways to detect art forgery is to determine whether the paint used is from the same location and time period as the artist. Art from the 16th or 18th century, for instance, like paintings by Michelangelo or Goya, would have contained lead and other elements you wouldn’t find in paints used today. Another technique is the use of ultraviolet light that can detect antique varnish. So, what Penrenyi did was he used Q-tips to clean off antique varnish from old paintings, mixed the varnish that he squeezed off of the Q-tips with new varnish and used it over his paintings. Thus, the forgeries became undetectable to investigators,” Govindarajoo said. “I was fascinated by the amount of chemistry involved, and rather than just talk about it, I would rather students watch the science in action.”

"I hope this course spreads the interconnectedness of art and science in ways that scientists, artists and everyone in between can appreciate" - Geeta Govindarajoo

Bob Porcja, a laboratory support specialist and coordinator of the Chemistry Lecture Demonstration Facility at Rutgers–New Brunswick, is accustomed to experimenting with physical changes and chemical reactions in front of chemistry students under the direction of Professor Darrin York. When Govindarajoo asked him to perform demonstrations that integrated artistic principles, he was excited at the chance to examine science in a new way.

“One of the first experiments we did this semester was when we placed different salt solutions containing methanol in separate bowls and set them on fire, then watched as the flames became different colors depending on what chemical was used. This change in color explains things like how light and energy interact with chemicals and cause these beautiful pink and purple colors,” Porcja said. “Understanding how light and color work is an important element in both art and science.”

Other demonstrations include mixing a soluble silver salt such as silver nitrate, treating it with ammonia and adding dextrose, which creates silver metal that sticks to glass and cracks, similar to patterns on holiday ornaments. Students will also learn about paper making, jewelry making and will get a chance to create photographs by using paper and chemicals that develop in sunlight in order to demonstrate how the first photographs were taken.

The course will also take students out of the classroom to visit the Zimmerli Art Museum’s Dimensionism: Modern Art in the Age of Einstein exhibitsionism: Modern Art in the Age of Einstein exhibit, which explores how modern art was influenced by advances in science. This includes Einstein’s theory of relativity, which Govindarajoo said offers students a multidimensional way to explore the ways art and science inform each other.

“What’s fun about this course is sometimes we learn one new thing, and that sparks an entirely new conversation and we brainstorm demonstrations around it. Even though the syllabus is mapped out, I am open to going off course and exploring new demonstrations that students want to see,” Govindarajoo said, adding that she hopes to one day partner with Mason Gross visual arts students to collaborate on projects that unite chemistry and art. “I hope this course spreads the interconnectedness of art and science in ways that scientists, artists and everyone in between can appreciate.”