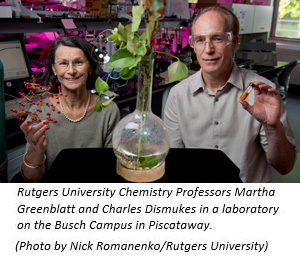 New research published by Rutgers University chemists has documented significant progress confronting one of the main challenges inhibiting widespread utilization of sustainable power: Creating a cost-effective process to store energy so it can be used later.

“We have developed a compound, Ni5P4 (nickel-5 phosphide-4), that has the potential to replace platinum in two types of electrochemical cells: electrolyzers that make hydrogen by splitting water through hydrogen evolution reaction (HER) powered by electrical energy, and fuel cells that make electricity from combining hydrogen and oxygen,” said Rutgers Chemistry Professor Charles Dismukes. “Platinum is the benchmark material for both devices as it has the best conversion efficiency. However, while platinum may be acceptable for making jewelry and low volume specialty applications, it is too expensive for large-scale applications such as energy storage and conversion. Our new HER catalyst, Ni5P4, has the strong potential to overcome this challenge.” 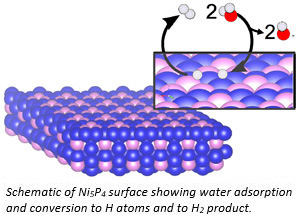 “Scientists have been working for years to develop low-cost replacements for platinum and other noble metals used in these devices,” Greenblatt said. “Ni5P4 is the most promising new material presently available that combines both the energy conversion efficiency of noble metals, yet is much more affordable based on the high natural abundance of its elements – over a million times greater than platinum.”

The researchers believe that Ni5P4 should lower the material costs of both electrolyzers and fuel cells, while maintaining the efficiencies of these technologies for electrical conversion. “These devices are two key technological advances that could open the door to renewable fuels produced from sustainable feedstocks – water and sunlight,” Dismukes said.

The next step for the research is to test the operating stability and efficiency of the compound over extended time periods in commercial electrolyzers and fuel cells. As these devices have different requirements for operation, independent tests for both will be needed. Rutgers has partnered with Proton OnSite of Wallingford, Conn., a commercial manufacturer of electrolyzers, to test Ni5P4 as an appropriate HER catalyst. 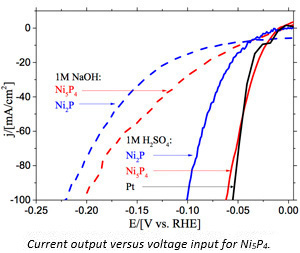 To achieve the overall water splitting process, the HER catalyst cathode will be combined with an oxygen-evolving (OER) catalyst anode. The Rutgers team has previously developed a noble-metal-free OER catalyst – LiCoO2 (lithium cobalt oxide) – that has shown promising performance in preliminary tests at Proton OnSite.

“If used together, these catalysts could eliminate the need for expensive noble metal based electrode materials,” Greenblatt said.

Funding for the Ni5P4 research was provided by the Air Force Office of Scientific Research, NATCO Pharma Ltd. and Rutgers, while the OER research is now being funding by the Department of Energy Office of Energy Efficiency and Renewable Energy.

In related work, scientists from Rutgers and Proton OnSite are partnering with members of the Solar Fuels Institute (SOFI) of Telluride, Colo. on a demonstration project that seeks to build a solar-powered mobile electrolyzer for making public demonstrations showing the production of a renewable liquid fuel using only sunlight, water and carbon dioxide as inputs.