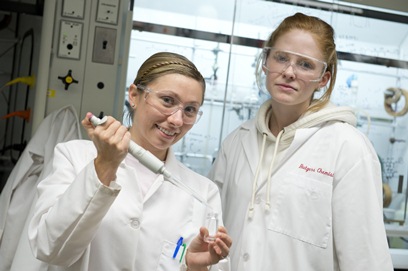 If Rutgers University Organic Chemistry Ph.D. candidate Michelle Ouimet pursues her polymer research with the enthusiasm and energy of a cheerleader, there’s a good reason: before coming to Rutgers three years ago, she could be found on the sidelines as an undergrad at Clemson University.

Today, Ouimet is bringing that energy to the table as the new President of the Chemistry Graduate Student Association (GSA). Ouimet is hoping to reinvigorate the GSA with new programs such as an industrial lecture series with Rutgers’ Chemistry alumni. Former GSA President Eric Klauber, a CCB alumnus who works at BASF, started the lecture series Thursday, November 29, discussing the transition from graduate school to industry.

This past summer GSA brought in a career consultant who volunteered his time to meet with students. GSA also held its first tailgate event at the recent homecoming football game that attracted 35 current and former students.

“The career consultant was really valuable for many because he coached us on how to network as we get closer to entering the business world,” said Ouimet, a Mount Olive resident. As for GSA activities: “We want to try new and different programs to get a better level of interaction with the graduate student community. A lot of graduate students don’t realize what a great school we have and one of the real advantages is the access to industry we are provided through our alumni as well as research collaborations.”

This summer, Ouimet got a great taste for those connections – literally. She had an internship with Kraft Foods New Technology Group in Whippany, N.J., which is an integral part of the company’s $15 billion gum and candy product portfolio with brands such as Trident, Halls, Stride, Dentyne, Swedish Fish, and Sour Patch Kids. Ouimet interned with a group that drives product innovation with developments such as long lasting taste and flavor changing technologies.

“I was very interested in learning more about rheology, or the flow of matter, and how I could implement that knowledge within my research at Rutgers,” said Ouimet, who worked on refining a gum with longer lasting taste. “The Kraft experience was great because it opened me up to the possibilities of working in the food industry. I also picked up some new experiences and skills that I could bring back to my team.”

Ouimet is part of the group led by Kathryn Uhrich, Professor and Dean of Mathematical and Physical Sciences at Rutgers, which focuses on the synthesis and characterization of biocompatible polymers for medical and dental applications such as drug delivery and tissue engineering.

“My research focuses on synthesizing, characterizing, and formulating bioactive-containing polymers for cosmetic, personal care, wound-care, and food-based applications,” said Ouimet. “I came to Rutgers because I wanted to learn from a world renowned polymer scientist like Kathryn and the experience has just been outstanding in every possible way. My goal has always been to continue learning and to consider new approaches and possibilities and our group really fosters that type of environment.”

Ouimet, a fellow of both the U.S. Department of Education and the Rutgers’ Predoctoral Leadership Development Institute, has co-authored several journal articles, including “Tunable drug release profiles from salicylate-based poly (anhydride-ester) matrices using small molecule admixtures,” to recently published in the Journal of Bioactive and Compatible Polymers.