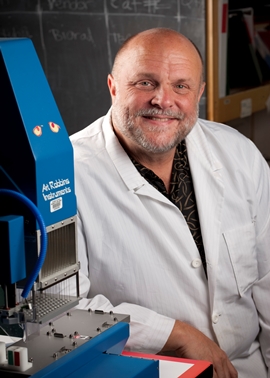 The groundbreaking, 25 years of anti-HIV research of Eddy Arnold, Rutgers University Board of Governors Professor of Chemistry and Chemical Biology and Center for Advanced Biotechnology and Medicine faculty, recently achieved another significant milestone, securing an expected $10.1 million in new federal funding. Already a partner in enabling the discovery and development of two FDA-approved drugs, Arnold’s team of researchers continues to pursue the growing medical problem presented by resistant strains of HIV.

“The virus is constantly mutating and the changes can diminish or completely prevent the effectiveness of existing AIDS drugs,” said Arnold. “In the 30 years since the virus appeared on the scene, we have gone from having no medication to having 26 drugs on the market. Our challenge remains to provide the most effective therapy and to get it to people in need in a cost-effective way.”

Arnold spearheaded an effort with Rutgers Chemistry Professors Roger A. Jones, Ronald M. Levy and Joseph Marcotrigiano, that has gained a projected five-year $6.3 million grant from the National Institute of General Medical Sciences, under the National Institutes of Health (NIH). “HIV Macromolecular Interactions and Impact on Viral Evolution of Drug Resistance” aims to fill in missing pieces of the HIV/AIDS structural puzzle, and to study the viral enzymes reverse transcriptase, integrase, and protease in different parts of the viral life cycle. “The research will focus on aspects of HIV structure/function that relate to viral assembly and maturation, drug design, and drug resistance,” said Arnold. The overall grant is directed by Professor Arthur Olson of The Scripps Research Institute in La Jolla, CA, and also includes investigators at Harvard University, Ohio State University and University of Pittsburgh. 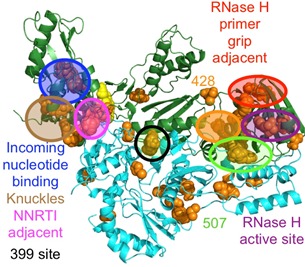 Arnold has also been notified that his NIH Method to Extend Research in Time (MERIT) Award has been extended for a second five-year period (2014-2019), with total expected funding of $3.8 million, for the project, “HIV-1 reverse transcriptase structure: function, inhibition, and resistance.” The National Institute of Allergy and Infectious Diseases grant, which originated in 1988, supports Arnold’s structure-function studies of HIV reverse transcriptase, a central component of the virus and the target of the most widely used anti-AIDS drugs. The grant represents the second consecutive NIH MERIT Award for Arnold, an honor bestowed on fewer than 5% of investigators. His team’s basic research results are used worldwide to interpret new scientific and clinical research findings in AIDS research.

“We hope to better understand the evolution of drug resistance and to improve drug design methodologies in the treatment of HIV-infected individuals,” said Arnold. “Enhanced understanding of HIV assembly, maturation, reverse transcription, and integration will help us create better therapies.”

Arnold and his group began working with the late Dr. Paul Janssen over two decades ago to create drugs to fight AIDS. Janssen was a legendary drug developer and founder of Johnson & Johnson subsidiary, Janssen Pharmaceutica. Arnold’s research was essential in bringing two anti-HIV drugs to market – Edurant (rilpivirine) in 2011 and Intelence (etravirine) in 2008.

Arnold’s team developed innovative models that not only explain why Edurant and Intelence are particularly effective against drug-resistant viruses, but that can also be used in the development of treatments for a wide variety of other diseases. The gist of the model is that flexibility of a drug can allow it to adapt to changes in HIV or other disease-causing agents, thereby evading resistance.

Arnold’s current research program focuses on developing fundamental knowledge about and new therapeutics for diseases including AIDS and influenza. With colleagues in his group and at Rutgers University, he has co-founded Prodaptics Pharmaceuticals, a company that has established a structure-based drug design platform for discovery of new therapeutics for treatment of infectious diseases.

According to the Joint United Nations Programme on HIV/AIDS, more than 34 million people are living with HIV worldwide. The Centers for Disease Control and Prevention estimates that 1.1 million U.S. residents are living with the disease.