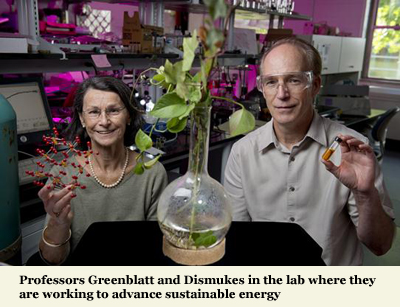 For years, scientists and researchers worldwide have confronted the daunting challenge of making sustainable energy sufficiently cost effective to be mass produced. Recent testing at the U.S. Department of Energy’s research center on artificial fuels may indicate a solution has been found in the lab of Rutgers University Chemistry Professors Charles Dismukes and Martha Greenblatt.

“Developing chemical processes that will facilitate mass production of economical, environment-friendly solar and wind electricity is one of the biggest challenges of the energy crisis,” said Dismukes. “The noble metal catalysts that are presently used in electrolyzers, the devices that convert direct electric current harnessed by solar panels into fuels, are very expensive."

"We have synthesized, patented and licensed a catalyst process that will be nearly as efficient as the current standard and is comprised of elements that are up to 10 million times more abundant in nature, and much less expensive.”

The Rutgers spinel catalyst, LiCoO2 (lithium cobalt oxide), has been licensed to a large international corporation seeking to use the catalyst to replace IrO2 (iridium oxide), the most widely used commercial catalyst, said Greenblatt, Rutgers Board of Governors Professor in the Department of Chemistry and Chemical Biology. Electrolyzers are used to separate hydrogen and oxygen from water via electrolysis, consuming electricity to make fuels.

“In theory,” Dismukes said, “we will be able to build electrolyzers that will be much more energy efficient because the spinel catalysts can be used at much higher concentrations, thus reducing the amount of electricity consumed and waste heat generated. We envision electrolyzers that will be so cost-effective they are disposable. Capital and operating expenses will decrease significantly because electrolyzer design can be greatly simplified.”

Earlier this year, the LiCoO2 catalyst for oxygen evolution reaction (OER) was described in an article published in Angewandte Chemie International by Dismukes, Greenblatt and colleagues.1 The catalyst was recently tested at the Joint Center for Artificial Photosynthesis (JCAP), the nation’s largest research program dedicated to the development of an artificial solar-fuel generation technology. Established in 2010 by the U.S. Department of Energy, JCAP is led by the California Institute of Technology and aims to find a cost-effective method to produce fuels using only sunlight, water, and carbon dioxide as inputs.

“LiCoO2 is arguably one of the most effective, if not the best OER catalyst presently,” said Greenblatt. “Nevertheless, we continue our research to discover new materials that are abundant, inexpensive and environmentally green, and highly efficient catalysts for splitting water into oxygen and hydrogen.”

“We are very encouraged by the research because it has the potential to change the way electrical energy is stored and recovered – in covalent chemical bonds rather than charged ions or batteries,” said Dismukes, a faculty Rutgers member in Chemistry and Chemical Biology, the Waksman Institute of Microbiology, and Biochemistry and Microbiology. “This step will require a new design of a low-cost electrolyzer that can work with these catalysts. This advance could be applied to both electrolytic energy storage – using solar or wind electricity – and renewable hydrogen generation. For example, as a replacement for batteries, this technology could help solve the energy storage problem that limits the adoption of solar panels. Also, hydrogen derived from water means a source of clean fuel that is both renewable and sustainable.”

The recent licensure of the LiCoO2 catalyst is Dismukes’ and Greenblatt’s latest opportunity to translate their fundamental research into a commercial application in collaboration with an industrial sponsor. The researchers have also worked with other corporate partners such as BASF to explore other applications of these materials. Additionally, Dismukes said Rutgers is a founding member of a new investigator consortium called the Solar Fuels Institute (SOFI), which hopes to accelerate the pace of technological advances needed to transition to solar produced fuels.

“Solar energy has become more attainable for property owners, but the challenge is producing a cost-effective process that results in mass production of renewable electricity,” said Dismukes, a father of three. “We are committed to working with colleagues worldwide to find solutions that ensure cleaner energy for future generations.”