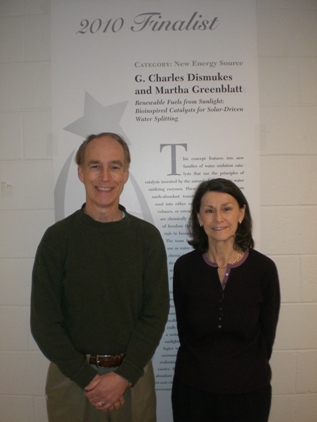 Profs. G. Charles Dismukes and Martha Greenblatt have been named finalists in the 2010 ConocoPhillips Energy Prize for their work entitled: “Renewable Fuels from Sunlight: Bioinspired Catalysts for Solar-Driven Water Splitting”. No commercially viable technology yet exists for making a sustainable fuel using energy provided by sunlight. That is the goal of research done by the finalists. The idea that led to this award involved the creation of two new families of biomimetic water oxidation catalysts, the component needed to efficiently split water into its elements. These catalysts use the principles that nature evolved in photosynthetic water oxidizing enzymes. They are made from earth-abundant elements containing a cubical metal oxide cluster. Two variations have been made, either individual molecular clusters called cubanes made from organometallic elements, or inorganic solids called spinels. Both classes are chemically modified to introduce degrees of freedom that allow these rock-like materials to become flexible and hence good catalysts. Dismukes and Greenblatt’s team have published reports describing their use in prototype solar cells and electrolyzers. Commercial electrolyzers for making hydrogen from water use low-abundance precious-metal catalysts that cannot be scaled to meet global energy needs. Creation of these unrealized technologies would allow utilization of sunlight and water as a nonpolluting carbon-free energy carrier.