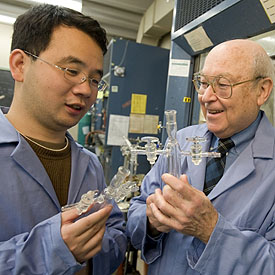 Prof. Robert A. Moss, the Louis P. Hammett Professor of Chemistry Emeritus in the Dept. of Chemistry and Chemical Biology, continues to receive media attention for his distinguished Arthur C. Cope. 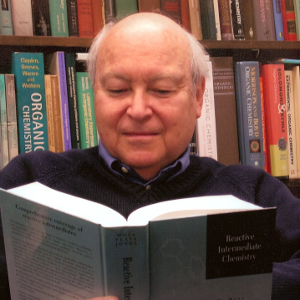 Professor Moss is widely recognized as a leading physical organic chemist, especially in the chemistry of the highly energetic and reactive species that intervene in many organic chemical reactions. These "reactive intermediates" include neutral compounds of divalent carbon ("carbenes") and positively charged carbon fragments ("carbocations"). Research in these areas provides the basic understanding of organic transformations that is essential to the design of new chemical syntheses in the chemical and pharmaceutical industries. Additionally, Dr. Moss has made highly original contributions to the chemistry of aggregated molecular systems such as liposomes and micelles. These include models for cells and cell membranes and for the biochemical processes mediated by enzymes. His laboratory has developed powerful reagents for the destruction of nerve agent toxins and environmentally deleterious phosphates. These reagents combine micelles and various catalytically active compounds of iodine, as well as a number of metallic species, including compounds of cerium, zirconium, lanthanum, thorium, and even uranium. The resulting chemistry is useful for the decontamination of areas and materials contaminated by chemical warfare agents. Also, the reagents may be useful in the treaty-mandated destruction of chemical warfare agents. A notable feature of Professor Moss's research program is its exceptional breadth, spanning a broad reach of contemporary organic chemistry.

The work behind the Cope Scholar Award to Bob Moss has been a puzzle that has taken nearly 25 years to solve. Another perspective on Prof. Moss' work is given in the Oct. 12, 2009 article in the Rutgers Focus magazine (link) and also posted on the Rutgers Today website.