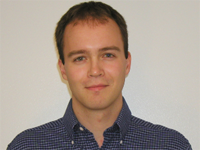 A recent publication in the Journal of the American Chemical Society (JACS) from the research group of Prof. Daniel Seidel (J. Am. Chem. Soc., 2009, 131 (47), pp 17060–17061) was the subject of a news report in the November 30 issue of Chemical & Engineering News. In this communication, Prof. Seidel and graduate students Chandra Kanta De and Eric G. Klauber introduce a new concept for asymmetric nucleophilic catalysis and its application to the kinetic resolution of amines. Rather than using a chiral nucleophilic catalyst such as a chiral derivative of 4-dimethylaminopyridine (DMAP) which is the current state of the art, Seidel and coworkers employ simple DMAP itself in combination with a chiral thiourea catalyst. The latter binds to the anion of an intermediate acyl pyridinium salt thus generating a chiral ion pair. This approach enables the kinetic resolution of racemic amines with simple acylating reagents (e.g., benzoic anhydride), a reaction that was previously only possible by means of enzymatic catalysis.

Prof. Seidel is an Assistant Professor in the Department of Chemistry and Chemical Biology at Rutgers. The main focus of the Seidel group is the development of new catalysts for various catalytic enantioselective transformations and the discovery of new synthetic methodologies of broad utility.