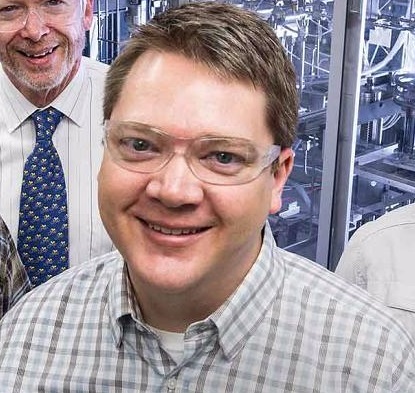 In order to economically generate renewable hydrogen fuel from solar energy using semiconductor-based devices, the U.S. Department of Energy Fuel Cells Technology Office has established technical targets of over 20% solar-to-hydrogen (STH) efficiency with several thousand hours of stability under operating conditions [1]. We have modeled attainable efficiencies of tandem absorbers that, for the first time, considered the absorption of sunlight by water [2]. We used this modeling to identify top and bottom semiconductor bandgap combinations that should be targeted to achieve maximal STH efficiency. We had to employ several key solid-state technological advances to achieve STH efficiencies exceeding 16% [3]. The first improvement was to increase the device photocurrent via extending the infrared absorption using a non-lattice-matched 1.2 eV InGaAs junction, created by the inverted metamorphic multijunction technique developed by NREL’s III-V photovoltaics group. The second modification was to add a thin n-GaInP2 layer to p-GaInP2 to generate a "buried junction", which increased the open-circuit voltage (and derived photocurrent onset) of the device by several hundred mV and enabled 14% STH efficiency. Finally, we increased the top junction photon conversion efficiency by adding an AlInP "window layer", which is commonly used in solid-state PV devices to reduce surface recombination. Through the use of a collimating tube, we measured our devices outdoors under direct solar illumination and verified over 16% STH conversion efficiency. I will also briefly introduce pitfalls of common experimental procedures that can influence the accuracy of measured STH efficiencies, which can be exaggerated for mulitjunction absorbers.

The largest loss in our current system is reflection at the semiconductor/electrolyte interface, so I will address the photon management strategies we use to achieve greater parity between measured efficiency and the theoretical limit. Capturing a significant portion of the ~25% of photons lost to reflection at this interface should allow the realization of devices that exceed 20% STH efficiency.