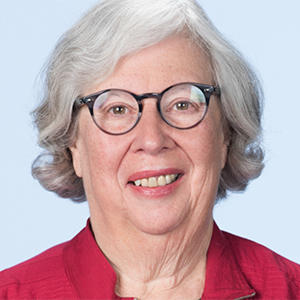 Board of Governors Distinguished Professor Emerita of Chemistry and Chemical Biology

Cofounder of the Protein Data Bank

Outside of my office on Busch campus, a 20-foot, 3,200-pound polished stainless steel and colored glass sculpture stands strong and tall. Synergy is based on the triple-helical structure of collagen. The most abundant protein in humans, collagen forms long molecular ropes that strengthen and support our tendons, bones, skin and internal organs. Collagen binds us together and enables us to move forward.

And in a very similar way, Synergy also celebrates Helen M. Berman, cofounder of the Protein Data Bank (PDB). It was under Helen Berman’s leadership that her laboratory at Rutgers first determined the 3D structure of the collagen triple-helix. So this ingenious and striking sculpture is equally a monument to Helen’s influence in the scientific and educational communities.

Synergy celebrates the determination of the first 3D structure of the collagen triple-helix in Helen M. Berman's laboratory at Rutgers. I think it also commemorates Helen's belief in the power of bringing things together to make magic, whether that be collections of data or encouraging collaborations of students and researchers.

Helen’s pioneering work with the PDB helped create an online collection of macromolecular machines submitted by researchers from around the world. Helen recognized the potential impact of sharing information about the early investigations into biomolecular structures, and was dedicated to free, “open access” data before it was fashionable. Her guiding force saw the archive established at Brookhaven in 1971, brought it to Rutgers in 1998 and led multiple celebrations of its 50th anniversary throughout 2021. The PDB grew from a handful to now more than 185,000 structures that tell so many stories about fundamental biology, biomedicine, biotechnology and energy.

Helen builds teams everywhere she goes, bringing people together to build software, make movies, mentor students and write histories. These intertwined collaborations are key to her many successes, and to the PDB’s longevity and impact.

Christine Zardecki is the deputy director of the RCSB Protein Data Bank.

Read full article here celebrating women of Rutgers who have opened new fields of research, worked to improve public health and made a difference at the university and beyond.