Manganese oxides occur naturally as minerals in at least 30 different crystal structures, providing a rigorous test system to explore the significance of atomic positions on the catalytic efficiency of water oxidation. We chose to systematically compare eight synthetic oxide structures containing Mn(III) and Mn(IV) only, with particular emphasis on the five known structural polymorphs of MnO2. We have adapted literature synthesis methods to obtain pure polymorphs and validated their homogeneity and crystallinity by powder X-ray diffraction and both transmission and scanning electron microscopies. Measurement of water oxidation rate by oxygen evolution in aqueous solution was conducted with dispersed nanoparticulate manganese oxides and a standard ruthenium dye photo-oxidant system. No Ru was absorbed on the catalyst surface as observed by XPS and EDX. The post reaction atomic structure was completely preserved with no amorphization, as observed by HRTEM. Catalytic activities, normalized to surface area (BET), decrease in the series Mn2O3 > Mn3O4

λ-MnO2, where the latter is derived from spinel LiMn2O4 following partial Li+ removal. No catalytic activity is observed from LiMn2O4 and four of the MnO2 polymorphs, in contrast to some literature reports with polydispersed manganese oxides and electro-deposited films. Catalytic activity within the eight examined Mn oxides was found exclusively for (distorted) cubic phases, Mn2O3 (bixbyite), Mn3O4 (hausmannite), and λ-MnO2 (spinel), all containing Mn(III) possessing longer Mn–O bonds between edge-sharing MnO6 octahedra. Electronically degenerate Mn(III) has antibonding electronic configuration eg1 which imparts lattice distortions due to the Jahn–Teller effect that are hypothesized to contribute to structural flexibility important for catalytic turnover in water oxidation at the surface.

Two polymorphs of nanocrystalline cubic spinel and rhombohedral layered lithium cobalt oxides have been prepared and their application in the photocatalytic oxidation of water examined. The main factor that determines the catalytic activity of the different phases is the presence of a Co4O4 cubic core, which is present in the cubic form of the catalyst, but not in the layered structure 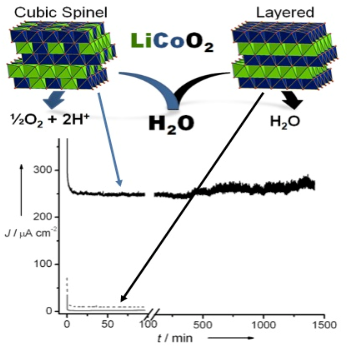 Transition metal oxides containing cubic B4O4 subcores are noted for their catalytic activity in water oxidation (OER). We synthesized a series of ternary spinel oxides, AB2O4, derived from LiMn2O4 by either replacement at the tetrahedral A site or Co substitution at the octahedral B site and measured their electrocatalytic OER activity. Atomic emission and powder X-ray diffraction confirmed spinel structure type and purity. Weak activation of the OER occurs upon A-site substitution: Zn2+ > Mg2+ > A-vacancy > Li+ = 0. Zn and Mg substitution is accompanied by (1) B-site conversion of Mn(IV) to Mn(III), resulting in expansion and higher symmetry of the [Mn4O4]4+ core relative to LiMn2O4 (inducing greater flexibility of the core and lower reorganization barrier to distortions), and (2) the electrochemical oxidation potential for Mn(III)/IV) increases by 0.15–0.2 V, producing a stronger driving force for water oxidation. Progressive replacement of Mn(III/IV) by Co(III) at the B site (LiMn2–xCoxO4, 0 ≤ x ≤ 1.5) both symmetrizes the [Mn4–xCoxO4] core and increases the oxidation potential for Co(III/IV), resulting in the highest OER activity within the spinel structure type. These observations point to two predictors of OER catalysis: (1) Among AMn2O4 spinels, those starting with Mn(III) in the resting lattice (prior to oxidation) result in longer, weaker Mn–O bonds for this eg1 antibonding electronic configuration, yielding greater core flexibility and a higher oxidation potential to Mn(IV), and (2) a linear free energy relationship exists between the electrocatalytic rate and the binding affinity of the substrate oxygen (*OH and *OOH) to the B site.