Photoelectrochemical cells (PEC) that can split water into hydrogen and oxygen using sunlight are a promising strategy to generate and store clean, renewable energy. However, PEC devices suffer from low stability and efficiency, preventing them to penetrate the market. Our group aims to significantly increase the solar to hydrogen conversion efficiency up to 10% using a tandem configuration, as well as to increase the lifetime of the device. In a tandem device, two semiconductor light absorbers (one for high energy and one for low energy radiation) are combined to utilize most of the solar spectrum. We are also interfacing the photoabsorbers with Rutgers-developed best in class earth-abundant hydrogen and oxygen-evolving catalysts to decrease the required cell potential to drive water splitting. 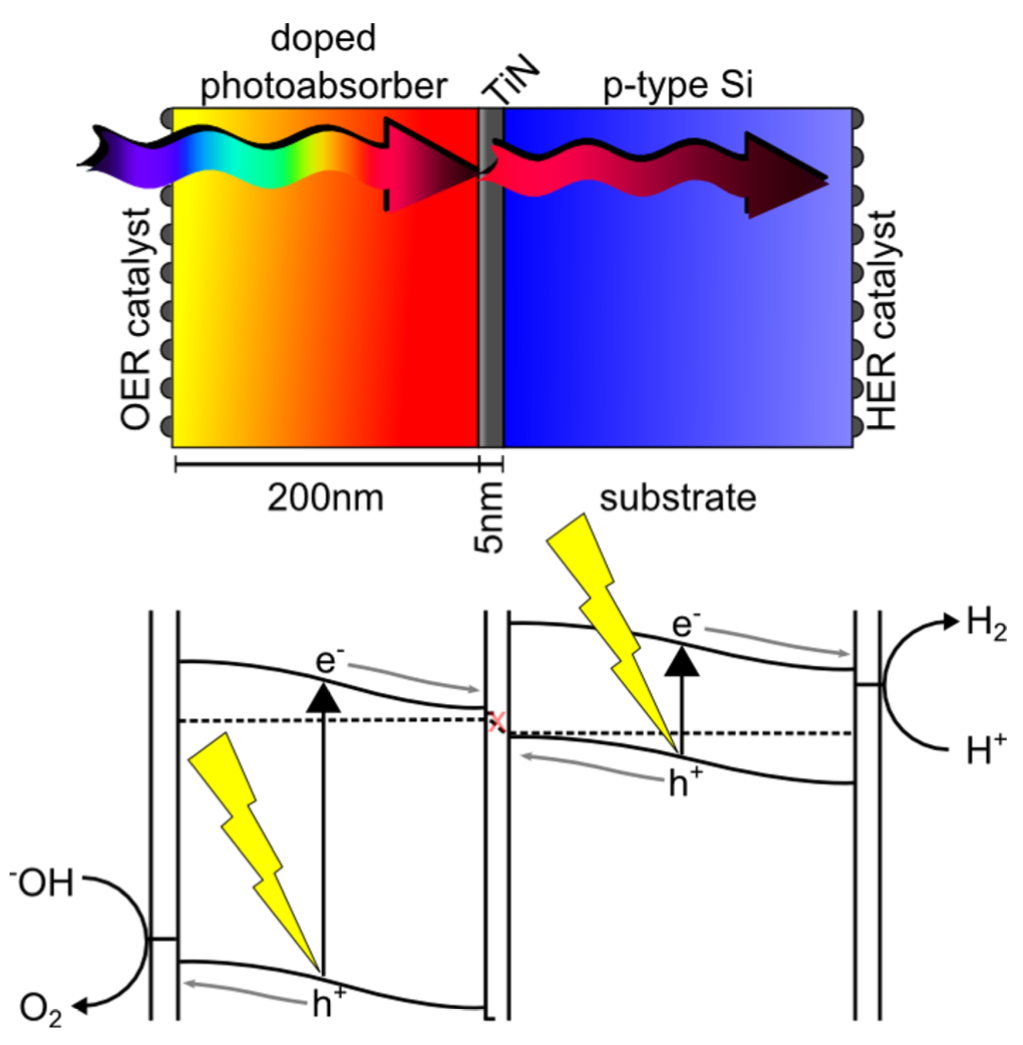 We have developed a successful fabrication route to nano-crystalline thin-films of cubic-NiP2 on a TiN-passivated Si photocathode. The elemental and structural analysis conducted by STEM, RBS, and XPS demonstrates the importance of the TiN interfacial layer as a necessary component to inhibit elemental diffusion during device fabrication at high temperatures. The NiP2/TiN interface is stable for over 125 hours without degradation. Superior activity and stability of devices using a TiN protection layer can be expected for other catalysts and other photoabsorbers (such as high-efficiency III-V semiconductors) thus, forecasting new opportunities for photoelectrochemical energy conversion into fuels from sunlight.

Our group investigates perovskite oxynitrides (ABO3-xNx where A is an alkaline or rare earth and B is a closed shell, d0 cation) for the photoanode, which absorbs the higher energy solar spectrum (>1.7 ~ 2.1 eV, most of the visible light). Pulsed laser deposition is used for deposition of the thin-film SrNbO2N photoabsorber, and physical characterization of its band structure demonstrates this photoabsorber is a suitable photoanode for tandem PEC.

Integration of OER catalysts to PEC devices requires the deposition of a thin-film that does not interfere light absorption of the photoabsorber. Cubic LiCoO2 is the best-in-class earth-abundant OER catalyst developed in our lab and validated in an industrial electrolyzer. We are now fabricating thin-film LiCoO2 (< 30 nm) using pulsed laser deposition (PLD), and have demonstrated PLD deposited thin-film LiCoO2 have similar activity to the reported powder samples in a given low-surface area electrode.